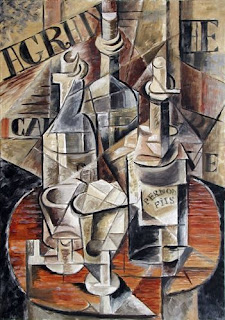 Cubism, highly influential visual arts style of the 20th century that was created principally by the artists Pablo Picasso and Georges Braque in Paris between 1907 and 1914. The Cubist style emphasized the flat, two-dimensional surface of the picture plane, rejecting the traditional techniques of perspective, foreshortening, modeling, and chiaroscuro, and refuting time-honoured theories that art should imitate nature. Cubist painters were not bound to copying form, texture, colour, and space; instead, they presented a new reality in paintings that depicted radically fragmented objects.

Cubism derived its name from remarks that were made by the critic Louis Vauxcelles, who derisively described Braque’s 1908 work Houses at L’Estaque as being composed of cubes. In Braque’s painting, the volumes of the houses, the cylindrical forms of the trees, and the tan-and-green colour scheme are reminiscent of Paul Cézanne’s landscapes, which deeply inspired the Cubists in their first stage of development (until 1909). It was, however, Les Demoiselles d’Avignon, painted by Picasso in 1907, that presaged the new style; in this work, the forms of five female nudes become fractured, angular shapes. As in Cézanne’s art, perspective is rendered through colour, with the warm reddish-browns advancing and the cool blues receding. 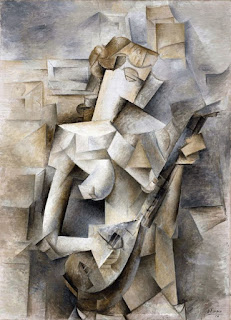 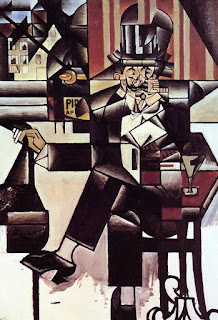 The movement’s development from 1910 to 1912 is often referred to as Analytical Cubism. During this period, the work of Picasso and Braque became so similar that their paintings are almost indistinguishable. Analytical Cubist paintings by both artists show the breaking down, or analysis, of form. Picasso and Braque favoured right-angle and straight-line construction, though occasionally some areas of their paintings appear sculptural, as in Picasso’s Girl with a Mandolin (1910). They simplified their colour schemes to a nearly monochromatic scale (hues of tan, brown, gray, cream, green, or blue were preferred) in order not to distract the viewer from the artist’s primary interest—the structure of form itself. The monochromatic colour scheme was suited to the presentation of complex, multiple views of the object, which was reduced to overlapping opaque and transparent planes. These planes appear to move beyond the surface of the canvas rather than to recede in depth. Forms are generally compact and dense in the centre of an Analytical Cubist painting, growing larger as they diffuse toward the edges of the canvas, as in Picasso’s Portrait of Ambroise Vollard (1909–10). In their work from this period, Picasso and Braque frequently combined representational motifs with letters; their favourite motifs were musical instruments, bottles, pitchers, glasses, newspapers, and the human face and figure. 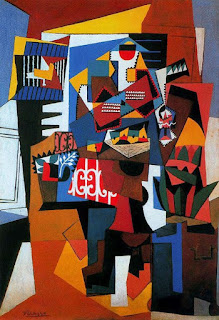 Interest in this subject matter continued after 1912, during the phase generally identified as Synthetic Cubism. Works of this phase emphasize the combination, or synthesis, of forms in the picture. Colour assumes a strong role in these works; shapes, while remaining fragmented and flat, are larger and more decorative. Smooth and rough surfaces may be contrasted with one another, and frequently foreign materials, such as newspapers or tobacco wrappers, are pasted on the canvas in combination with painted areas. This technique, known as collage, further emphasizes the differences in texture and, at the same time, poses the question of what is reality and what is illusion. 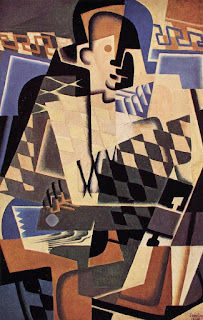 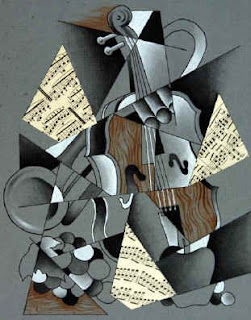 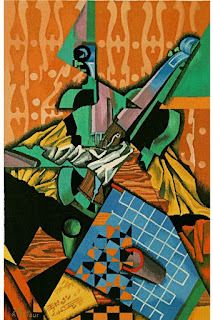 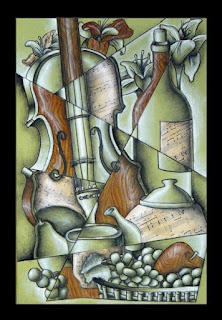 While Picasso and Braque are credited with creating this new visual language, it was adopted and further developed by many painters, including Fernand Léger, Robert and Sonia Delaunay, Juan Gris, Roger de la Fresnaye, Marcel Duchamp, Albert Gleizes, and Jean Metzinger. Though primarily associated with painting, Cubism also exerted a profound influence on 20th-century sculpture and architecture. The major Cubist sculptors were Alexander Archipenko, Raymond Duchamp-Villon, and Jacques Lipchitz. The adoption of the Cubist aesthetic by the Swiss architect Le Corbusier is reflected in the shapes of the houses he designed during the 1920s.
It Paved The Way for Pure Abstraction

One of the most influential art movements of the early twentieth century and one that remains a major source of inspiration for many artists today is Cubism. You may wonder, what is Cubism, how did it get started and why is it so important?

First of all, Cubism marked a major turning point in the whole evolution of modernist art. It is credited for having paved the way for the pure abstraction that dominated Western art for the next 50 years. It inspired future movements including Futurism, Constructivism, Dada and Surrealism.

Its influence was also felt in the field of literature, most notably in the writings of Gertrude Stein, James Joyce and William Faulkner, who applied the principles of abstract language, repetition and use of multiple narrators. And, in music, the composer Igor Stravinsky credited Cubism for having an impact on his work. 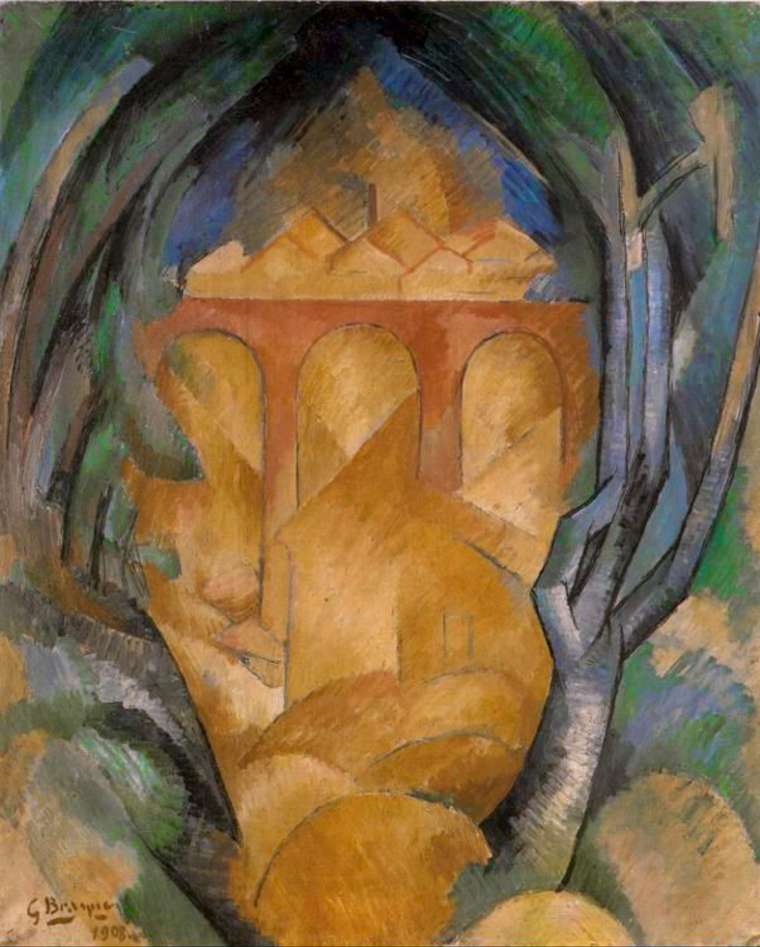 The term is broadly used in association with a wide variety of art produced in Paris (Montmartre, Montparnasse and Puteaux) during the 1910s and extending through the 1920s.

The late works of Paul Cézanne’s representation of three-dimensional form are credited as being primary influences that led to Cubism.

The French art critic Louis Vauxcelles coined the term Cubism after seeing the landscapes Braque had painted in 1908 at L’Estaque in emulation of Cézanne. The painting Le Viaduc de L’Estaque above is one of those paintings. Vauxcelles called the geometric forms in the highly abstracted works “cubes.”

In addition, other influences on early Cubism have been linked to Primitivism and non-Western sources.

In Cubist work up to 1910, the subject of a picture was usually discernible. During Analytic Cubism (1910–12), also called “hermetic,” Picasso and Braque so abstracted their works that they were reduced to just a series of overlapping planes and facets mostly in near-monochromatic browns, grays, or blacks.

The Cubist painters rejected the inherited concept that art should copy nature, or that artists should adopt the traditional techniques of perspective, modeling, and foreshortening. They dismantled traditional perspective and modeling in the round in order to emphasize the two-dimensional picture plane.

They reduced and fractured objects into geometric forms, and then realigned these within a shallow, relief-like space. They also used multiple or contrasting vantage points.

By taking these measures, they destroyed traditional “illusionism” in painting and radically changed the way we see the world.

Unlike Picasso and Braque, whose Cubist works were practically monochromatic, Juan Gris was known for painting with bright harmonious colors in daring, novel combinations in the manner of his friend Matisse.

He painted in the style of Analytical Cubism, a term he himself later coined. Affter 1913 he began his transition to Synthetic Cubism, with extensive use of papier collé or, collage.

It’s important to note that Picasso and Braque also introduced the Cubist collage as an important new modern art form. The origins of collage can be traced back hundreds of years, but this technique made a dramatic reappearance as an art form of novelty by these artists. They used fragments of mass-produced popular culture into pictures, thereby changing the very definition of art.

Another artist in the Cubist movement is Fernand Léger. In 1911 the hanging committee of the Salon des Indépendants placed together the painters identified as ‘Cubists’. Léger, along with Metzinger, Albert Gleizes, Le Fauconnier, Delaunay and Léger were responsible for revealing Cubism to the general public for the first time as an organized group.

“Cubism: The Leonard A. Lauder Collection”

Over the past 40 years, Leonard A. Lauder, the philanthropist and cosmetics billionaire, has selectively acquired masterpieces and seminal works to comprise the most important collection of Cubist Art that has ever existed in a private collection. Lauder, who began developing his love for Cubism in elementary school, has promised to give his entire collection, currently consisting of more than 80 works of art and growing, to the Metropolitan Museum of Art.

When Lauder was asked why he decided to gift the Metropolitan Museum such an extraordinary collection, he stated, “I wanted to transform a museum… and I believe it will transform the Met.”