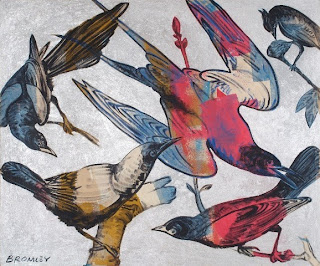 Self-taught artist David Bromley's paintings have rich layers of vibrant colour and texture which cover the canvases in an obvious relish for painterliness. Figures are outlined in black in a way which is reminiscent of comic book imagery and pop art. Rather than super-heroes, though, Bromley chooses to paint women, birds and butterflies – marks of beauty, fertility and fragility – with rich backdrops of gold- and silver-leaf.


In exploring the female form, David Bromley paints life-size poses, either provocative or demure, of models from fashion and film. The portraits are commanding and seductive, the women attractive and alluring. While his inspiration may be Warhol, Bromley’s lines are more reductive in nature, with much cooler colours being used – often cold blues and metallics. Bromley has found a balance in his nudes that artists have long struggled with – that line between the erotic and innocent. Over centuries the nature of the female nude has shifted from the voluptuous maternal figure to the waif-like siren. Bromley creates a nude that is the perfect balance of both. His focus is clearly beauty & the upliftment of his viewers.

Vibrant and inspirational, Bromley swims against the tide of introspective, socio-political dialogue that pervades the art arena. A self-confessed rebel, he asserts that his art should be uplifting and lyrical, appealing to a side of us that is not bogged down in the transient high jinks of contemporary politics, psychology and economics. A side of us that celebrates simpler, more enduring fruit – a welcome tonic in unsettling times.

Bromley was born in 1960, Sheffield, in the UK. He moved to Australia in 1964, where he now lives and works. He has exhibited around the world, including Singapore, Paris, Tokyo & London. His sought-after works fall into two categories, namely the distinctive "Nudes" series and the nostalgic "Childhood" series. These are produced on a variety of mediums, acrylic on linen canvases, works on paper, screenprints, tapestries and bronzes. He was also named as one of the 50 most collectible artists in Australia by Australian Art Collector Magazine. 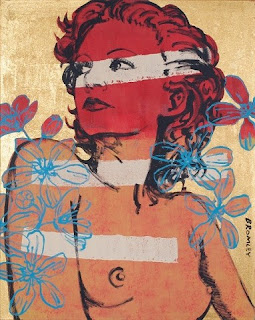 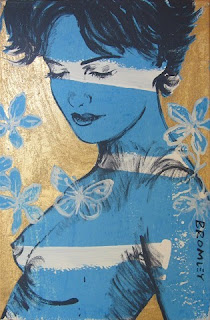 "Whilst through his nudes - a departure both in subject matter and tone, we witness the adult and very private Bromley, the observant and reflective David, the artist who pays homage to beautiful women. A collection of diverse sitters that to my mind, reflect the spirit of Tori Dixon-Whittle - his partner, strength and muse." -Michael Reid Art Market Analyst for The Australian

"As male adolescence is interrupted by puberty and girls, so is this exhibition with paintings of pin-up beauties such as Rebecca, Melinda and Jillian. In these larger works, Bromley tackles the neglected theme of the female nude, and openly celebrates their youthful forms as objects of mystery and desire." - Jeff Makin, Herald Sun Monday April 17 2000

"I have been painting portraits for years, but mainly concentrating on the face. I wanted to evolve these portraits by adding emotion expressed through the body. I have taken photographs for years - doing fashion shoots - stills for film and music-clips. My aim is to represent the female form in a way that parallels the sexy, contemporary fashion and photographic magazines. It has been a challenging and rewarding process, and I have been inspired by love of Warhol´s work - in particular his portraiture and figurative work."