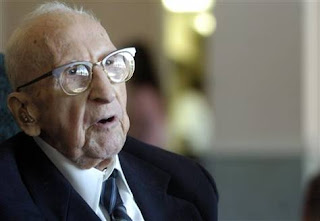 In this photo taken July 22, 2009, Walter Breuning talks about his life at the Rainbow Retirement Community in Great Falls, Montana.
GREAT FALLS, Mont. — A Montana resident believed to be the world's oldest man celebrated his 114th birthday Tuesday at a retirement home in Great Falls.

His wife, Agnes, a railroad telegraph operator from Butte, died in 1957. The couple had no children.

Breuning inherited the distinction of being the world's oldest man in July 2009 when Briton Henry Allingham died at age 113. Allingham had joked that the secret to long life was "Cigarettes, whisky and wild, wild women — and a good sense of humor," according to Guinness World Records.

Breuning gave a speech at an invitation-only birthday party at the Rainbow Retirement Community in downtown Great Falls, where he lives, with a guest list that included Montana Gov. Brian Schweitzer and representatives from Guinness World Records.

Breuning recalled "the dark ages," when his family moved to South Dakota in 1901 and lived for 11 years without electricity, water or plumbing.

He said men and women are able to enjoy life, but they can't be content without a belief or faith. His parting message to the crowd was one of tolerance.

"With all the hatred in this world, in this good world, let us be kind to one another," Breuning said.

Breuning has celebrity status at the retirement home, with visitors waiting in line to see him, Ray Milversted, 92, told The Great Falls Tribune.

Tina Bundtrock, executive director of the Rainbow, said the home has adopted a policy of scheduling visits with Breuning by appointment, so he's not taxed by people dropping in to see him.

Gavin Seeberger recalled how his father, former Great Falls banker John Seeberger, tried to persuade Breuning in the mid-1990s to purchase a two-year certificate of deposit instead of a five-year CD. Breuning had come into the bank to take advantage of a special rate on five-year CDs, and he insisted that he would be there to collect it in person at age 105 when it matured.

And he did, Gavin Seeberger told the Great Falls newspaper.

"That is being sure of one's self," he said.